This tour covers 2 great destinations in Cambodia (  from the capital to the city of Angkor). Only 1 week, you can explore the best of Cambodia

Arrival in Phnom Penh, meet by the guide and driver

Transfer to the hotel and free at leisure

At 8.30 Am , pick up from your hotel for full-day tour to the Royal Palace compound built in 1866 by the Predecessors of King Norodom, is the most conspicuous feature and also one of impressive colorful Khmer-style Palaces. Nearby the Royal Palace is Silver Pagoda (The Emerald Buddha temple), display plenty of Buddha Statues that were decorated and made by diamond, emerald, gold and silver. Travelers will proceed to visit Independence Monument which was constructed in 1954 after Cambodian took their country back from French colony, continuing the visit to National Museum, the distinctive red building with a beautiful Khmer architecture was build since 1917 and contains more than 5000 art objects made of sandstone, bronze, silver, copper, wood and others.

Visit Tuol Sleng prison (Genocide Museum) which was the most secret organ of the Khmer Rouge regime. S-21 stands for “Security Office 21.” was Angkar’s premier security institution, specifically designed for the interrogation and extermination of anti Angkar elements. Then shopping at Toul Tompong Market (called Russian Market), so-named because of the prevalence of items from the Eastern Bloc in past times, the Russian Market today is a treasure trove for tourists, that you will feel a bustling daily life of local people with Cambodian’s special character through local specialties, their houses, their face. You will be transferred back to hotel. Tour ends at about 5:00pm.  Overnight in Phnom Penh

After breakfast, flight to Seam Reap. We will have lunch at local restaurant.

In the afternoon we begin with a visit to Wat Bo founded in the 18th century, which is a highly respected pagoda containing very unique wall paintings of the Reamker (Ramayana). Then visit LES ARTISAN D’ANGKOR (Wood and Stone carving training centre), and Cambodia famous Gem shop (Cambodia is rich in many varieties of gems, sapphires, rubies and emeralds. The most famous Cambodian mines are located in Pailin. Sapphires from Pailin are considered among the best sapphires in the world). After which we proceed to Bakheng Hill, and watch the beautiful sunset & scenery of Angkor Wat. Overnight in Siem Reap

• Sightseeing in Angkor
• Visit Angkor Wat
The crowning jewel of Khmer architecture, ANGKOR WAT is the national symbol and the highlight of any visit to Cambodia. The largest, best preserved, and most religiously significant of the Angkor temples, Angkor impresses visitors both by its sheer scale and beautifully proportioned layout, as well as the delicate artistry of its carvings. To approach the temple, first cross the vast moat, continuing along a broad causeway lined with naga balustrades. As you enter the main building, ascend through a series of galleries and courtyard before reaching the central sanctuary, which offers beautiful views back over the causeway and across the surrounding countryside. On the way, stop to enjoy the intricate stonecarvings that adorn nearly every surface, with some 1,700 Apsaras, or celestial dancers, sculpted into the walls. Along the outer gallery walls run the longest continuous bas-relief in the world, which narrates stories from Hindu mythology, including the famous Churning of the Ocean of Milk. Angkor Wat is stunning at any time of the day, but sunrise and sunset are especially beautiful times to watch the play of light on the stones.
• Visit Angkor Thom
The fortified city of ANGKOR THOM covers an area of 10 square km. Enclosed by a wall and wide moats, the city includes many of Angkor's most popular sights. Enter by the monumental SOUTH GATE over a causeway lined on either side by statues of demons and gods, each carrying a giant naga. Continue to the TERRACE OF THE ELEPHANTS and the TERRACE OF THE LEPER KINGS, former spaces for public cermonies, both adorned with dramatic bas reliefs. Visit the ruined BAPHUON, ROYAL ENCLOSURE and PHIMEANAKAS before continuing to the mysterious BAYON TEMPLE. In this temple, one of the most popular and compelling in Angkor, explore the galleries of beautifully preserved bas reliefs and ascend narrow stairs to reach the central sanctuary, where you will find giant stone faces smiling enigmatically down at you from every angle.
• Visit Ta Prohm
One of the most popular attractions of Angkor as much of the jungle has not been cleared and it looks very much as most of the Angkor monuments would have appeared when European explorers first stumbled across them.
• Visit a temple for sunset
Watch the sun set over the Cambodian countryside from the upper terraces of an ancient Angkorian temple.  Overnight in Siem Reap

• Visit by boat to TONLE SAP Lake and FLOATING HOUSES
Departure to the lake and walk. We explore on a wooden boat the Tonle Sap, the Great Lake of Cambodia and its floating villages. Every year, the water level of the great lake changes from 4 to 8 m, overflowing land and forest. Cruising on the great lake and discovering the floating village and fishing’s techniques. Cruise back to Siem Reap and overnight in a hotel in Siem Reap.  Free in the rest of the day.  Overinight in Siem Reap

Free until Transfer to the airport for departure flight to onward destination: End of the trip! 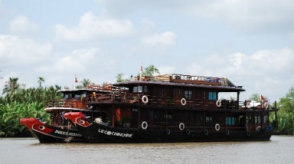 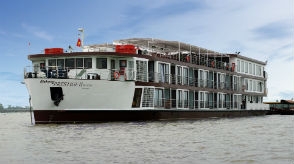 RV Mekong Prestige II
8 days 7 nights
Discover the stunning journey on the Mighty Mekong River in Vietnam and Cambodia with the luxurious boutique RV Mekong Prestige II cruise. Reminiscent in design of the many French colonial-era manor homes that once lined the streets of old Saigon and Phnom Penh, the 32- cabin RV Mekong Prestige II is sophisticated yet comfortable design with French balcony. Spacious and indulgent, yet intimate enough to feel entirely exclusive, the Mekong Prestige II incorporates relaxed yet refined lounging, dining areas, sundeck and bubble pool. Great dining with Vietnamese and Khmer food on board and interesting excursions with knowledgeable English Guide will inspire guests. Modern navigation technologies and the highest cruise ship standards as well as our experienced river pilot and crew ensure smooth travel and safety on the water.
$1900 - $2700 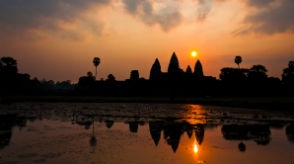 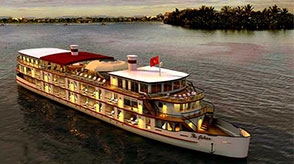 Siem Reap - Phnom Penh with Jahan Cruise
4 days 3 nights
Discover the bygone elegance of travel aboard the majestic Jahan. Just as Indian art and architecture influenced the Khmer and Cham cultures in the Mekong Delta, the stunning artistry of The Jahan will inspire you, as will the delta’s vibrant beauty.
$900 - $1000 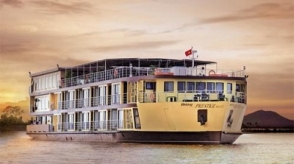 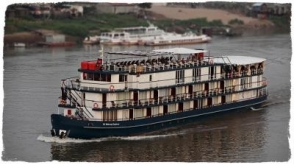 Vietnam - Cambodia with Jayavarman Mekong Cruise
8 days 7 nights
With three-and-a-half decks, the Jayavarman is as spacious as it is beautiful. Guests can admire Khmer artifacts in the Henry Mouhot Lounge, mingle in the Club 1930 Bar, dine in the elegant Indochina Dining Hall, and recharge with spa treatments in the Apsara Spa. A Jacuzzi is located on the top Sun Deck, which offers spectacular views of the passing delta.
$1900 - $3200 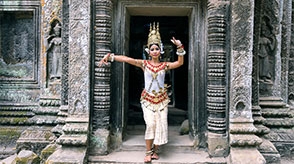 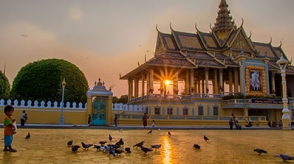 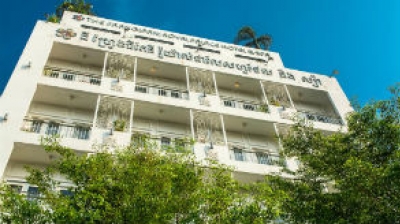 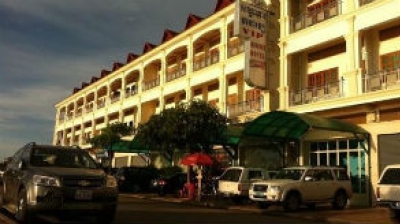 Monorom Vip Hotel
$25 - $100
Monorom VIP Hotel located in heart city which you can access to any area easily. Our Luxury rooms and Superior rooms face to the Mekong river have private balcony that let you enjoy with nice view from the river, sun rise, boat flow fresh air.
Detail 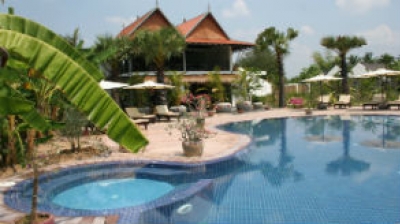 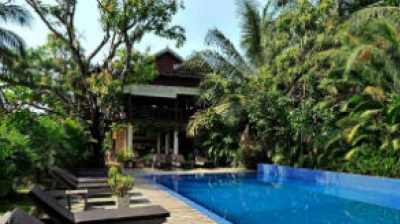 Sambor Village Hotel
$60 - $90
This French-owned place brings boutique to Kompong Thom. Rooms are set in spacious bungalows and the verdant gardens include an inviting pool under the shade of a mango tree. The upstairs restaurant in the attractive main house has international cuisine and impressive hard-wood flooring. Free mountain bike use. Located about 700m east of NH6. Hotel Room: 19
Detail 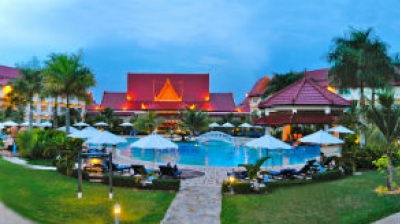 Sokha Beach Resort
$160 - $380
Discover Sokha Beach Resort located at the south of Cambodia and experience the Khmer hospitality with world-class service. Explore the private pristine white sandy beach stretch out of 1.5 kilometres long only Sokha Beach can offer. 25 minutes from the airport and 2 minutes away from Sihanouk Ville downtown.
Detail 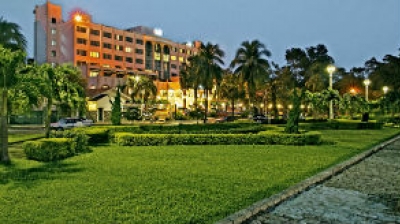 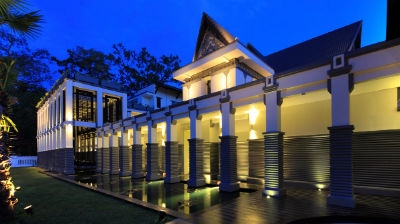 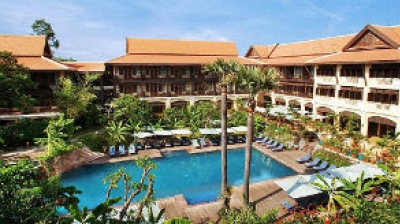 Victoria Angkor Resort & Spa
$130 - $280
Victoria Angkor Resort & Spa is a 5* hotel in the heart of Siem Reap that reminds us the wellbeing, elegance and refinement of the French Lifestyle. Its design is inspired by the 1930’s colonial architecture. Located in the city center, in front of the “Royal Park” and completely immerged into its natural environment, our resort is few minutes away from the Old Market, 7km from the Siem Reap International Airport and 6km from the Angkor Temples. Hotel rooms: 130
Detail 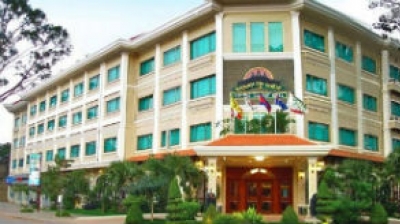 Angkor Holiday Hotel
$55 - $140
Welcome to luxury accommodation with international standard service and genuine Cambodia hospitality and smile. Our friendly, helpful staff will ensure that your stay with us is enjoyable and relaxing after a rich but sometimes tiring day at the Angkor Temples. The hotel offers 162 most comfortable rooms that are all equipped with an array of features intended for your comfort.
Detail